Air conditioning firm was founded in 1992 and established an employee ownership trust in July 2021 to help safeguard the culture it had already created as an ‘employee-driven’ business. 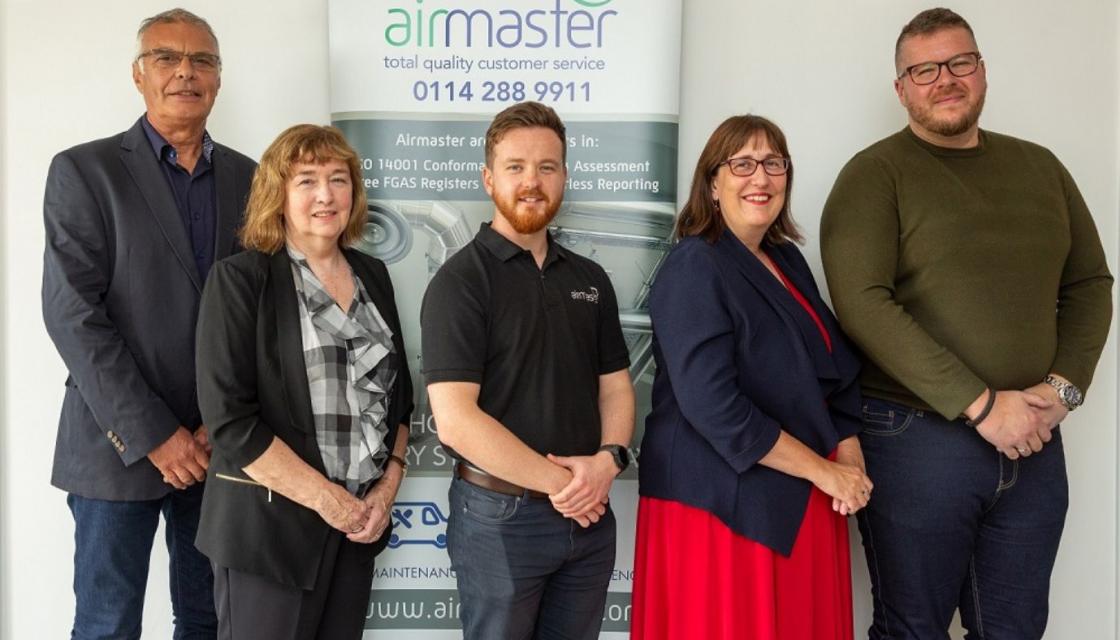 “Airmaster is a family-feel business with a close-knit team, the ethos of employee ownership was already there,” says Managing Director Lisa Pogson.

Recently marking 30 years since it was formed, South Yorkshire-based air conditioning experts Airmaster made the transition to employee ownership on July 1, 2021.

The company, which has 37 employees, designs, installs and maintains bespoke energy-efficient systems for heating and cooling, commercial plumbing and ventilation from its Swallownest headquarters near Sheffield.

Founder Richard Pogson and Director Tony England had been talking about business succession options for when the time came for them to exit the company.

In 2016, Richard and Tony stepped away from the day-to-day running of Airmaster and then Resources Director Lisa became joint Managing Director with former Operations Director Mark Staniland.

When Lisa and Mark took over, they were considering the prospects of a management buyout (MBO), however, sadly Mark fell ill and passed away in 2019.

“We were delighted to transition to employee ownership and reward the staff for their commitment to the company,” Lisa added.

“People in our team are passionate and keen to take it forward as a business – and Gripple who we visited had shown us what they had done – it’ll be great to see people growing into different roles and growing the business itself.

“I feel really positive about what we have done. I’m so glad we didn’t sell it to a buyer and we kept it in the team, because we’ve put all the effort and hard work in. We had the possibility of being bought out and it felt like it wouldn’t stay with the same Airmaster ethos."

“I know if Mark is looking down, he would be really proud that we have done it this way because it’s something that we had looked at together, and for Richard and Tony it made sense to them.”
- Lisa Pogson, Airmaster Managing Director

How it took just ‘months’ to transition to employee ownership

When potential buyers went away in December 2020, Airmaster discussed employee ownership as an alternative and after a “hectic” period, the transition was completed just a few months later.

“We had been advised it would take a long time, but the solicitor we got involved said that wasn’t the case and if you’ve already got that culture and mindset you just go for it,” she added. “We have a can-do attitude at Airmaster!”

Once the transition was complete, Airmaster held a Q&A with Richard, the Chairman, and its new independent trustee, Margaret Ferris, to give employees the opportunity to “digest the information” and then ask any follow-ups in a second Q&A.

Airmaster says “on the whole” the reaction of the employees was a positive one. A lot of the concerns raised in these sessions were around people asking, ‘what are my responsibilities’ and ‘am I in debt?’.

However, people “settled a bit” once they were reassured that “we hadn’t given them a big debt and they were just doing what they were doing before, they’ll just have more say and be able to get more out if it financially in the long run”.

Sitting alongside its original board of Tony, Lisa and Gareth Campbell (newly promoted to Operations Director), a trustee board was established which consists of Richard (Founder/Trustee), Margaret (Chair of the Trust) and Design Engineer James Dawson, who was made the employee trustee representative.

Employee trustee James says having the trustee board has allowed that employee voice to be heard in a structured way, although he admits there had already been a culture of openness before Airmaster became employee owned.

“We are quite open anyway as a business – it doesn’t feel like a workplace, although it is, it’s the Airmaster family and it does feel like that."
- Design Engineer James Dawson, employee trustee at Airmaster

“The one thing I found when I started working at Airmaster six years ago is that there’s not really that distinction between ‘I’m a new starter or an apprentice, I can’t go and speak to our chairman or MD’, I’ve never felt that at all," James said.

“Before I got to know what employee ownership was, I think Airmaster already had the fundamentals of that model anyway, it’s always been employee driven.

“A lot of people here have worked their way up, our Operations Director Gareth started at 16 and I started as a graduate designer. It definitely fits the model that Airmaster had anyway, so it’s always made sense to me.

“The trustee board meetings we have now take that overview of what the business is doing. It provides that extra layer of making sure the decisions in the business are in the best interest of everyone.”